From the desk of the editor

Welcome to the July edition of i2P, and of course, the first week of the new financial year.

Note that we are developing a new range of categories for you to follow e.g. health politics, hospital news, an expanded IT offer and we will be developing the category of anti-ageing medicine

Also, out of interest, could I refer you to the e-publications category located immediately below our columnists. If you click on the link contained there, you will find a range of e-publications that are recommended reading.

The first publication noted is the Pharmacist Activist written by Dr Daniel A. Hussar of the faculty of the Philadelphia College of Pharmacy at the University of the Sciences in Philadelphia. He is a pharmacy advocate.

I read some market research recently that ought to concern community pharmacists across the country, as well as the Pharmacy Guild of Australia.
Groups of average Australians were brought together for a series of focus groups to discuss the community pharmacy landscape as they see it.
Some of the feedback was disconcerting.

Has the horse bolted?

Some twenty years ago uneasy tremors were running through hospital pharmacy here in Perth. Hospital management had suggested to one of my fellow Chief Pharmacists that the hospital needed a total parenteral and intravenous additive service (IVAS) .
When it was pointed out that this would be very labour intensive and the pharmacy did not have sufficient staff to provide it, the comment was that “nurses would be happy to run such a service”.

In the region where I practice, GP’s are reluctant to comply with a patient request for a Home Medication Review.
The stock standard phrase is “I can do that for you” and so in frustration a patient will turn to me, in a professional, or quite commonly in a social setting, and asks if it is possible for me to perform a review without the doctor’s involvement.

Disgraceful – discuss
The newspapers have been chock-a-block the past few days with dire tales but true about the black hole we are about to enter with the insane policy to re-regulate the ‘workplace’ to suit the union paymaster cliques.
While I never voted for Keating I did admire him a little bit this morning when I read a quote of his from the bad old days.
He said to some union goose: “you are carrying the jobs of (100,000) dead men around your shoulders”.
Giving a dead hand to this union unfettered power play will ensure that the nation will soon look like NSW; where the government is actually the plaything of a few loosely combined public ‘service’ union mugs.
Depending on how large your pharmacy is, in terms of overall staffing, you will soon be touched by the coming dead hand of the new/old order.

The recent furore in the UK over pharmacist Elizabeth Lee receiving a conviction for a criminal offence and subsequently a suspended jail sentence, has really lit a fire under the imbalances that exist when a pharmacy dispensing error is made.
The dispensing pharmacist or the supervising pharmacist under current UK legislation, has been made to bear the brunt of legal responsibility, with pharmacy owners escaping with little pain.
According to an article in PJ Online "In many cases, all that the employer needs to establish is that he had standard operating procedures in place and that the employee or locum had simply not complied with them. In these cases, the employer can walk away leaving the employee or locum to face the, often damaging, consequences".
There is now a rush in the UK to have current legislation amended to reflect a more proportionate responsibility for all parties involved.

The appointment for the first time of a Minister for Indigenous, Rural and Regional Health and Regional Service Delivery is an important strategic recognition of the special needs and circumstances facing people in Australia's rural and remote communities.
People in the bush will expect this position to be part of a permanent increase in the Government's commitment to rural communities.
In welcoming Minister Warren Snowdon to the new position, Dr Jenny May, Chairperson of the National Rural Health Alliance (NRHA), said the appointment will be important both for substantive policy reasons and to boost the place of rural issues on the political agenda.

The following news item was recently published in Science Alert. It would seem that the pristine environment of New Zealand is under attack. The reasons are similar to those findings in Australia surrounding the protection of the Great Barrier Reef.

A new "fertility first" hypothesis published this week by a group of international experts in the American Journal of Human Biology, proposes that the global epidemic of Type 2 diabetes has its origins in the struggle, over millennia, to sustain human fertility in environments defined by famine.
A surprising and important implication for us in the modern world is that this hypothesis gives cause for optimism that the modern epidemics of diabetes and cardiovascular disease will diminish.
Source: Sydney University

A team of Monash University researchers has discovered the importance of a protein, which could improve the way the drug interferon is used to strengthen the human immune system.
Published online in the prestigious journal Immunity, the findings show that the protein promyelocytic leukemia zinc finger (PLZF) is a key player in the body's immune response to disease, increasing our understanding of the function of the immune system.(Source: Science Alert )

China is notable for its authoritarian approach to the Internet and other forms of media communications.
Restrictions on Internet activity may have some long-term implications for Australia, particularly as these restrictions are intruding into the health arena.
Source: Tech.Blorge

Little thought seems to have occurred in maintaining and supporting mature aged pharmacists in the workplace.
Given that this group of pharmacists is the one with the "corporate memory" of the profession, with many having started life as compounding pharmacists and counter-prescribers, there is a wealth of untapped intellectual resource that could be internally utilised in mentoring or even training pharmacists in how to sell a professional service.
This group of pharmacists is concerned with the development of retail clinics proposing to do almost exactly what they were successfully doing 30-40 years ago.
What went wrong?

Well, there is plenty of evidence to illustrate that the process of commoditising medicines is the primary reason for this loss, because if you strip everything out of a process to sell at the cheapest possible price, you get a barren professional offering
Source: Science Alert

It is clear that the Terry White pharmacy group is on the move with the recent purchase of Pharmacy Direct and a restructure of its own management. Terry has had a distinguished pharmacy career and his stewardship will see possibly the strongest pharmacy group in Australia emerge He is opening up the opportunity for equity for senior members of his management team.
The following excerpt extracted from pharmacy media reports explains the process.

The Australian public is exposed to some outrageous headlines attempting to excite them about spending rorts by people in high places. Rarely though is it exposed to the enormous spending on death defying recklessness by people on tobacco products.

The headline (on right) is supposed to create anger that the Nation’s Prime Minister travels too much. 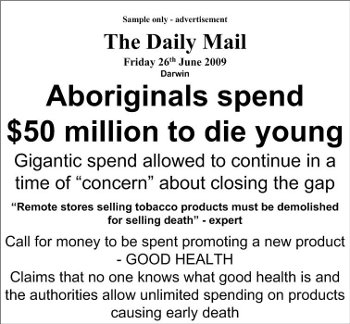 What about the other? (on left) – Would it raise an eyebrow or simply be put aside with a sigh and an exclamation of – “oh well – you have to die of something”. And after the death – “oh yes but he was a smoker” as if that makes it all right to smoke to death.

The hackneyed old excuse that people have to take responsibility for their own health must be banned from use in a situation where people are legally allowed to buy products that are promoting a low life expectancy. By the time people “learn” to take personal responsibility for their actions thousands will have died from the effects of tobacco products and only the government of the day will be to blame for allowing this carnage to continue. Who will then say “sorry” in 50 years time?

A remote community of 2,500 population spends $80,000 a fortnight of a $500,000 welfare cheque on tobacco products. It is estimated that a further $80,000 is spent on Ganja. (References available). 12 years ago the community store, takeaway and licensed club at Nguiu (Bathurst Island) was taking over 50% of its total revenue from beer and tobacco products. What of the others and where are the stats now? If anyone has them please speak up or is this vital market intelligence silenced by the same people that are profiting from the marketing of ill health? 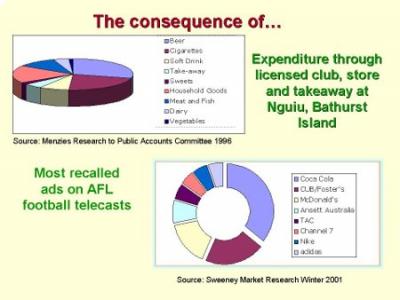 And how good would it be if that same amount was being spent on community development activities or to facilitate the development of enterprises that would create employment opportunities. Yes that is right – something to do. Anyone who has (or does) smoke will know how much less is smoked when in a working environment that does either not allow smoking or is such that it is not possible to smoke. Imagine if of that 2,500 population there were suddenly 200 with a job – no time to smoke. If the money was put into a community fund a lot could happen.

As for the price of cigarettes – who cares?

A smoker will spend up to $15 a packet if they feel they need it. For all the debate about what difference the price makes, and how “price sensitive” is the marketplace – forget it. Not many smokers would know how much they paid for their last packet of cigarettes.

Just put the price up to $25 a packet and put the $10 a packet into a community fund.

If $80,000 a fortnight is being spent on cigarettes and peop 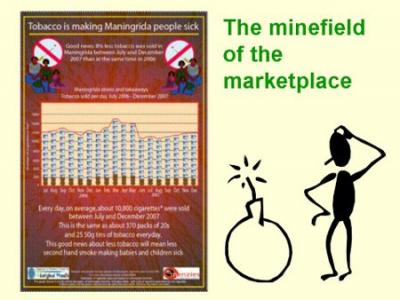 le halved the amount they smoked – there would be (potentially) $40,000 a fortnight to go into a community fund for extra community development activities or an educational fund for school excursions. That is $ One million a year for a community fund from a self imposed tobacco tax. The cost benefit to the community is huge – what a headline that would make!

Only drastic measures will bring about behavioural change and it is about time the authorities “bit the bullet” and did something drastic. Tinkering around the edges has produced no change and the situation still exists where people in these communities do not know what good health is.

Spend the money from the tobacco tax on promoting good health – but in the same vigorous way that McDonalds, Coke and Kentucky promote ill health and oh yes VB, Four Ex, Tooheys and Fosters too. 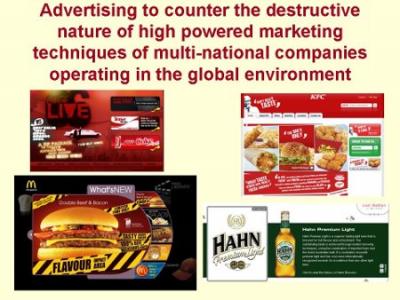 As for the remote community takeaway stores – some of them are just selling sickness. Bulldoze them all and create a “good health” store where at least the choices will be healthy ones.

NB Illustrations in this article are from a presentation – “When bad health is normal – what is good health- a plan to market Good Health to remote living Aboriginal people across the North of Australia”. Copies available on request to the author

If any difficulty is found in subscribing, please use the "Contact Us" panel found in the navigation bar with the message "subscribe" and your email address.